Tubal opening surgery is performed to repair the tubal damage. Tubal problems are found in the 20-25% infertile 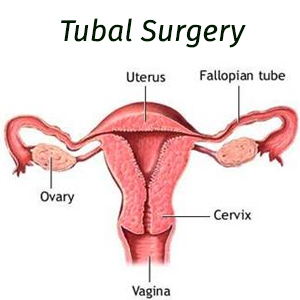 couples. The main aim of the surgery is not just open the fallopian tubes but to achieve the pregnancy and make capable of capturing the eggs transporting it to the uterus.
The surgery treatment of tubal depends on the degree of the tubal damage. Tubal opening surgery can be performed through the laparoscopy or laparotomy. The tubal opening surgery is used to open the fallopian tubes which allow the eggs to pass in the uterus (womb).
Before starting the surgery doctor will ask for the complete medical history (previous pregnancies, termination reports, appendicitis with peritonitisor any other major disease) of the patient. Half of the women who are found to have blocked tubes have no past medical history.

Looking for a free cost estimate for treatment abroad.

There are five types of tubal surgery

Tubal Microsurgery
In this surgery a horizontal or vertical incision cut is used usually a “bikini cut”. Tubal microsurgery isexpansive. A general anesthesia is given to the patient in the spinal. In this surgery, a microscope and another surgical instruments are used to view and remove the unnecessary trauma tissues.
Proximal tubal damage
This procedure is used to remove the corneal blockage due to the presence of mucus plugs. This surgery involves the implanting the tubes into the uterus. The success rate of getting pregnant after the surgery increase to 50%.
Salpingostomy
This operation is performed to open the fallopian tubes blockage from the ends. Very fine stitches can be placed so that edges to the open tubes come out. The success rate of the surgery is 30%.
Tubal Reanastomosis
This procedure involves the rejoining of the healthy portion of tubes. The success rate depends on the how many portions of the tubes is damage.
Distal tubes damage
This surgery is performed if the tubes are complete damage; in this surgery doctors creates the new opening for the tubes. This surgery has very less success rate.

When we think to start our family and met our gynecologist, she told us that due to some problems in my womb I can’t carry pregnancy then we both lose our hope of becoming parents. By the time we are leaving from our doctor’s clinic one of the couples sitting there told us about FCN and also they told us that they have achieved the successful pregnancy there. Then we both decided to travel to Nepal and visit once the FCN center with a thought that maybe we can also achieve a successful pregnancy. The time we enter the FCN center we felt the warmth in the atmosphere and we are surrounded by positive energy.  When we met the fertility expert and discuss our case with them, they told us not to lose our hope because for us they have the best fertility treatment which is Surrogacy. This is… END_OF_DOCUMENT_TOKEN_TO_BE_REPLACED

We are blessed with own baby by surrogacy
END_OF_DOCUMENT_TOKEN_TO_BE_REPLACED

Bringing a new life into this world is a major decision in every couple’s life, however, all their dreams break into pieces when the women are unable to get pregnant after having regular unprotected intercourse for more than 12 months. The same happened with me and when I consult with my gynecologist then she told me it’s difficult for me to get pregnant because the eggs which were produced by me are not healthy enough for fertilization then my sister take me to FCN and discuss my case with the fertility expert. They suggest me the egg donation program where the donated eggs from other women will be fertilized with the sperm of my husband and then the resulted embryo will be implanted into my uterus in order to establish the successful pregnancy. My all credit goes to FCN team for givi… END_OF_DOCUMENT_TOKEN_TO_BE_REPLACED

END_OF_DOCUMENT_TOKEN_TO_BE_REPLACED

When I and my husband start planning for a baby and we met our gynecologist then she told me that I am not able to carry a baby in my womb due to medical illness and if I to conceive than it could affect the health of the baby as well. We both were very scared and lost all our hopes of becoming parents of an own baby. Then someone suggests me FCN clinic in Nepal where happiness born every day. We visit this clinic and find the warmth in the atmosphere. The fertility experts including other staff members are very cooperative and supportive and after a proper examination they suggest me the best fertility treatment which is surrogacy where the eggs of other women is used and fertilized with my husband’s sperm and then implanted into the uterus of another woman who is gestational surrogate … END_OF_DOCUMENT_TOKEN_TO_BE_REPLACED

Surrogacy We greatly thanks to all the fertility experts and other staff members at FCN who made pregnancy possible for us when all other clinics refused to treat the infertility factor for us. You guys offered the best treatment which is Gestational surrogacy where the fertility experts of FCN used my own eggs and my husband sperm for fertilization and implant the same into the uterus of the Gestational surrogate mother and also we thank gestational surrogate mother who carries the pregnancy in her womb for 9 months for us and delivers our baby without any hassles. In this way, we get our own biological child and also the charges at FCN are very reasonable for the infertility treatment as compared with other fertility clinics and also the team members at FCN are very supportive and coo… END_OF_DOCUMENT_TOKEN_TO_BE_REPLACED

END_OF_DOCUMENT_TOKEN_TO_BE_REPLACED

We have tried so many fertility treatments but all were failed at the time of fertilization and we are unable to understand that what is happening. We lose us all hope and health condition of my wife is going down day by day. Then my brother told me about FCN and its success rate. We visited there but many things were going in our mind. The time we enter FCN we found the warmth in the environment and positive energy around us. We met the fertility expert and she diagnoses my wife and come to conclusion that the reason for failed fertilization is the cause of infertility with which my wife is dealing but they told us that not to lose our hope because they have various treatments to treat infertility if one treatment will not work they will go for another one to fulfill our dream. Thanks to … END_OF_DOCUMENT_TOKEN_TO_BE_REPLACED