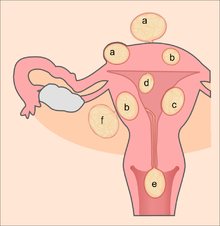 theendometrium. The endometrium layer protects and nourishes a growing pregnancy. Fibroids develop on the surface of the uterus cavity itself.
The most common symptoms of the fibroids are heavy bleeding and pelvic pressure. Other possible symptoms include pain with deep penetration during intercourse. Large fibroids lead to the fibroids surgery.
In most of the cases,awoman with fibroidsdoes not face difficulty in pregnancy. There are certain situations in which a woman faces difficulty in pregnancy. There are some tests available that are performed to check the availability of fibroids like a pelvic exam or pelvic exam.The measurements of the dimensions of the fibroids, i.e. length, width and depth, and the mean diameter calculated during the test. The position of the fibroids also calculated.

A fibroid grows into the uterus that may prevent an embryo from implanting. Fibroids block fallopian tubes and preventing the egg to pass to the uterus or sperm to entering the fallopian tube. The primary treatment of fibroids tumors is surgical treatment.
There are two types of surgery available for fibroids

Myomectomy is very effective treatment for fibroids. For a woman who has fibroids symptoms should take this treatment.

Hysterectomy is a major surgical procedure in which the uterus is removed. After a hysterectomy, menstrual bleeding stops, the pelvic pressure is relieved, frequent urination improves and new fibroids cannot grow. A woman can no longer become pregnant after a hysterectomy.